T is for Tugboats

Anybody been on a cruise? People seem to love them or never want to set foot on a cruise ship. I’m somewhere in between. I had no interest – other than an Alaskan cruise which is still on my bucket list – until our friends Coco and Lou suggested we join them on their Mediterranean cruise. What fun we had with a group of 16 friends from Colorado and Pennsylvania cavorting among the 1,500 on the Brilliance of the Seas (Royal Caribbean).

While the cruise didn’t change my mind about future cruises, I was pleasantly surprised at the lack of long lines, interminable waits and crowded conditions we had been warned to expect. Those simply didn’t occur on our ship.

We started in Barcelona and round-tripped it through ports in France, Italy, Greece and Turkey before flying home from Barcelona. One of the small asides I enjoyed on the water was watching the tugboats at each port of call. Those tiny little boats belied their strength and agility; and the men who worked the tugs had to be the hardiest stock to brave those waters and perform that unsteady, heavy manual labor day after day, cruise ship after cruise ship. Watching them position themselves – sometimes scurrying to realign – reminded me of a border collie herding sheep: all watchful eyes and quick, deliberate directional changes to keep his flock in position. Each tug was brightly painted; I suppose more to protect against the sea salt than for my viewing pleasure. Nevertheless, I enjoyed the brilliant blues and reds, and also took special notice of each boat’s name, proudly displayed on the side of the tug. Some appeared to be family names.

Not everything goes according to plan. The day we were scheduled to arrive on the island of Mykonos – despite bright blue sky and sunshine – the wind was fiercely gusting, and the sea was very rough. Our captain had warned us ahead of time that docking was “iffy”; the pictures don’t do justice to the size of the waves those tugs faced in their quest to deliver us to the island. 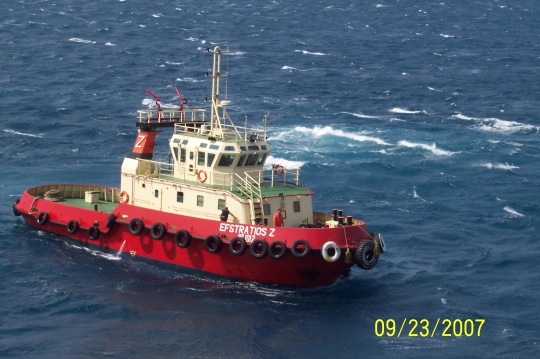 After several attempts, the captain came on the loudspeaker and announced that one of the lines between the ship and a tug had broken, a sure sign we weren’t safe to continue. Regretfully we turned away from Mykonos, and the tugs chugged their way doggedly back to port.

I started musing about the complex, behind-the-scenes planning and co-ordination just to bring one cruise ship to port. How many people, supplies, pieces of equipment, and boats are utilized every time a large ship comes to port? Who co-ordinates the comings and goings; who assigns the tugs; who monitors the weather; who allocates the supplies? Where do they gas up? Do they perform their own repairs? How many families are employed in that industry? How many young men follow their fathers footsteps or inherit their livlihoods? The list goes on.

When we approached the port of KusaDasi, Turkey in late afternoon, I stood on our narrow balcony watching the tugs come to greet us. The two on my side of the boat were a large bright blue one and a tiny flashy red one. He looked like the litter of the runt, just spunky enough to keep up with his big brother. But they were all business, and it was no time at all before we were securely docked and off the boat to hear the wail from the muezzins at nearby mosques calling their followers to prayer. 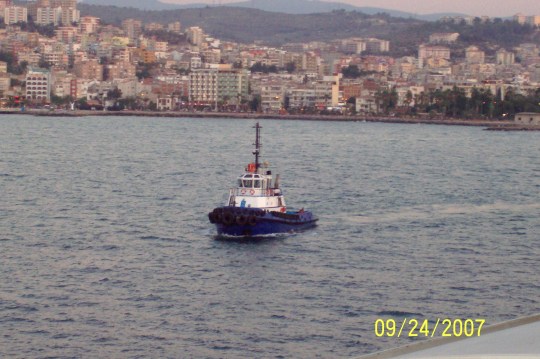 Watch for that little red runt pulling his weight on the right hand side! 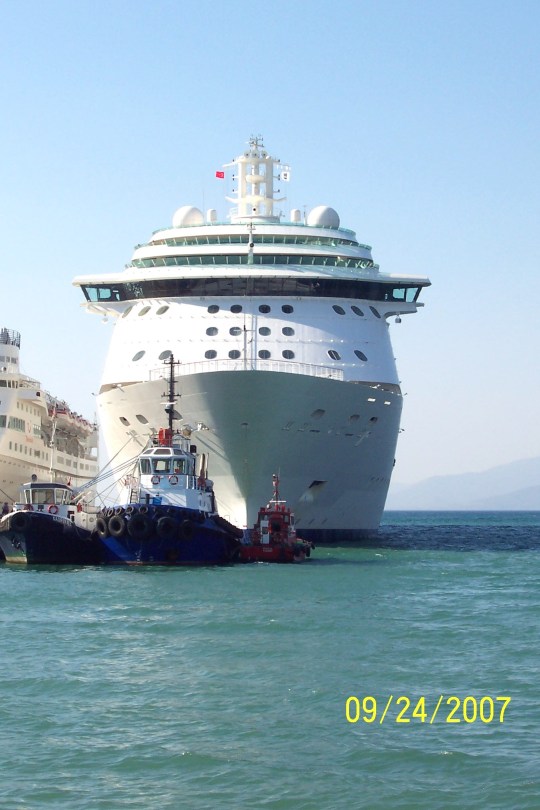 S is for Sandwich

U is for Useless