V is for Vintage 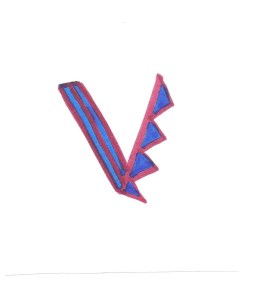 Then I did the math. OK, half a century ago. But who’s counting?

These bracelets, which I’ve purchased on Ebay, are made of silver or gold metal composite with plastic inserts called thermoset. Coro, Lisner and Miriam Haskell are three of the costume jewelry companies of the ‘50’s and 60’s that designed and sold these then-trendy thermoset bracelets and necklaces. 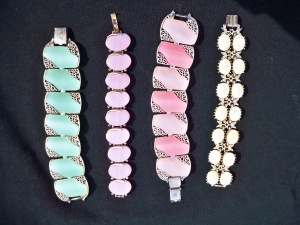 I like wearing them, fantasizing about their previous owners. Sometimes I imagine I’ve inherited family heirlooms from eccentric great aunts.

Until a week ago, I planned to end this post with the sentence above. All that changed when I was checking in at my orthodontist appointment, and the receptionist complimented me on this bracelet.

I explained to her my hobby of acquiring them on Ebay, and she told me about a store called Charming Charlie, which is “all the rage” as she described it. She said they sell inexpensive jewelry remarkably similar to my bracelet; in fact she said she’d seen one just like it.

Apparently everything old IS new again.

U is for Useless

W is for Wheelbarrow