Who hasn’t repeated that iconic line from Billy Crystal’s character “Fernanado” during his stint on Saturday Night Live 1984-85?

Billy Crystal turned 65 on March 14, 2013. He has been an entertainer and comedian since the day he was born. Now he entertains us once again with his recently published memoir, Still Foolin’ ‘Em. I highly recommend this book to anyone who’s enjoyed Billy at any stage in his career. 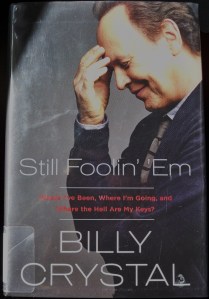 Billy’s early audience consisted of his close-knit Long Island Jewish family, headed by his father who was a jazz concert promoter and managed the Commodore Music Shop in New York City. Extended family gatherings were the perfect venue for young Billy to figure out he enjoyed the limelight and was a “natural” at entertaining a crowd.

“Growing up Crystal”, as Billy describes it, meant immersion in jazz music at his Dad’s record store; hours listening to comedy records his Dad brought home; and summertime explorations of the surrounding beaches, boardwalks and waterways with his childhood buddies.

As expected, the book chronicles Billy’s rise to stardom: his grueling late nights in comedy and nightclubs, his Saturday Night Live stint, his successful movie career, and his reign as host of the Academy Awards.

However the true essence of Billy’s memoir comes down to:

While he writes of the woes and ironies of aging with the bawdy humor you’d expect, it is his passion for his family, his late father and the New York Yankees that makes this memoir so compelling. I will leave it to you, dear reader, to learn more about Billy’s lifelong love affair with the Yankees, his early musical adventures in the company of New York’s jazz greats, his long and happy marriage to Janice, his relationship with his beloved daughters and grandchildren, and his enduring friendship with Muhammed Ali.

When Billy was only 15, he lost his father unexpectedly, a loss that deeply affected Billy. Because his father worked six days a week, Sunday was the only day Billy was able to spend with him. Billy calculated they had exactly 700 Sundays together. In 2013, in a loving tribute to his father, Billy wrote and acted in his one-man, Tony-winning, Broadway production called “700 Sundays”. It aired recently on HBO; if you have a chance to see it, do!

Lions, Tigers and Tangles – Oh My!

May I Introduce You To