The Time I Was Mistaken for a Drug Runner – Part 3

Fortunately I drove across Illinois to Michigan without a repeat of those flashing police car lights in my rear view mirror. Dad was recovering well, and I remained in Michigan for a week. There were lots of family members present, lots of emotion, and lots of logistics to settle so I was immersed in helping Dad and Mom make decisions.

I kept re-playing my Iowa incident in my mind. Having been fleeced in a scam years ago, ironically by someone posing as a cop, I wasn’t convinced I hadn’t unwittingly provided my driver’s license and registration data to an identity thief.

I decided if I still had doubts after I returned to Colorado and checked all my bank and credit card activity, I’d contact the Iowa State Patrol.

Dad’s chemo/radiation plan established, and Plan B’s for local food, driving, cleaning and therapy support if needed, I left Michigan – not wanting to leave Dad but wanting to be in Colorado with Hub.

Lo and behold as I drove the 30 mile stretch outside of Des Moines, this time heading west, I saw two cars pulled over across the highway in the eastbound lanes. Each time the car was boxed in by a police car at its front and rear. The occupants were clearly cuffed, sitting by the side of the road. There were piles on the side of the road as police removed everything from each car – in one case even the back seats had been pulled from the car. 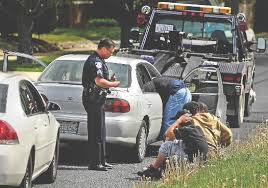 Once home, I got online and confirmed the Iowa information on ‘my paper’ matched the official Iowa State Patrol website and nothing fishy had shown up in my financial accounts. I stashed ‘my paper’ back in my car’s glove box and put that whole episode out of my mind until a year later when Hub and I packed the car for our September 2010 visit to Michigan.

We have our road trip ritual down. Hub drives the first shift when his caffeine is going full bore. Thus he’d be driving the dawn stretch on the second travel day heading east from Des Moines.

Hub has a lead foot.

Hub has a deaf ear to my “slow down” pleadings.

I reminded him how anxious I get about being stopped, and I pulled out the “if you REALLY love me, you’ll …” card. I could tell he didn’t think the whole ‘drug runner’ episode would be repeated, but he humored me by staying under the speed limit as we left Des Moines. We didn’t leave the Holiday Inn until 7am, so the sky was light.

About 25 miles east of Des Moines, we passed a police car idling in the crossover. The policeman pulled out as soon as we passed him.  He drove slightly behind us, but he stayed in the left lane. For ten excruciating minutes nothing happened, except for my heart rate skyrocketing as I rummaged in the glove box for my by-now-badly-faded-therma-fax ‘paper’.

Suddenly he accelerated forward, lights flashing. Instead of motioning us over, he zoomed in behind the car ahead of us which bore California plates. Both cars quickly pulled to the side of the highway.

All I can surmise is he ran my plates through the system while following us, and my car was still documented as ‘little old lady; no longer runs with or without drugs’.

I was so giddy, I wanted to shout, “SUCKER!” to those hapless Californians, but knew the karma would surely kickback.

Fast forward to 2014; Hub and I are preparing for our annual visit to Michigan.

And I have a new car with new license plates.

I don’t know whether to place a ‘Bro’ Don’t Cuff Me’ or ‘Been There Done That’ sign in the back window.

Save your bail money just in case.

Postscript: I wrote this series last week AFTER we returned from our road trip to Michigan in my new car. We rarely saw a police car in any state. Curious about the lack of activity around Des Moines, I located an online report about two Poker players from California who – this month – filed suit against the Iowa State Patrol for a 2013 traffic stop in which police searched the car and confiscated $100,000 in winnings. The suit claims the officers had no probable cause to search the car resulting in unreasonable search and seizure targeting out-of-state cars. Police still have not returned all the money.  (I’m not sure why the poker players would take their winnings in cash and drive around with it in the car!)

This series is an anecdotal story, not intended to imply judgment on profiling, drug wars or police tactics. I continue to place my trust in our public safety officers.

The Time I Was Mistaken for a Drug Runner – Part 2