Before summer and autumn fool me once again into thinking I like them best.

Springtime in Michigan as a child was a time of joy and wonder; a time when each of my five senses came alive.

Robins chirping at dawn like a faithful alarm clock, and the ground springing to life as if stretching its giant arms after a long winter’s sleep.

What I remember most is the aroma of the newly awakening outdoors. The minute I stepped outside, the scent of rich, dark soil moistened by melting snow filled my nose. That raw, loamy aroma was as pungent as any singular bloom and lingered for several weeks, enhanced by occasional spring rains – the kind without wind, thunder or lightning when walking under an umbrella was novel and fun.

The sidewalks were littered with fat, juicy earthworms who’d wriggle their way out of the soaking soil, bringing with them an earthy scent all their own. The lucky ones made it back to the safety of their underground abodes before a robin gobbled them for lunch, or an inattentive human squashed the life juice right out of them, leaving a flattened, brown leathery string glued to the sidewalk.

While I can’t choose a favorite flora, I can pinpoint five that immediately transport me to my first spring memories. Just as the robins woke my ears and the soil twitched my nose, these plants gave me visual, touch and taste sensations.

Forsythia – An early spring bloomer, growing in the southwest corner of our “near” back yard. A four-foot shrub with long, gently drooping limbs and tiny brilliant yellow flowers running up and down the branches. Such delicate blooms that a hard, windy rain shower or a late-arriving snowstorm would prematurely knock the flowers from the limbs, leaving shocked naked branches quivering for a green leaf robe.

Daffodils – another early bloomer. We had a large back yard. In the 50’s there were few fences, although we had a wire fence along the southern edge of our “way back” yard. Mom grew daffodils along that fence. What seemed like hundreds of daffodils. Plain yellow was the only available variety and they bloomed in such abundance it was like sunshine beaming from the ground. I’ve tried, in vain, to grow them; alas I don’t have the ‘daffodil touch’.

Spirea – these 4-foot bushes formed a hedge that separated our ‘near’ back yard from our ‘way back’ yard. They have an abundance of small whitish blooms and dime-size, scallop-edged green leaves.  I haven’t found a spirea here in Colorado, which is a shame, because I can’t teach Sparks and Raqi one of my favorite youth pasttimes – picking a spirea leaf; placing it front-side down on my tongue; and pressing my teeth against my tongue while blowing air in such a way that the leaf vibrated against my tongue producing a shrill whistle. Simple pure kid-in-nature fun. Tasted kind of bitter but worth it for the whistle.

Lilacs – Giant shrubs, tall enough I could squeeze in between the vertical old-growth stems and the new shoots as a child and pretend I was in a mini-forest. Seven or eight lilacs formed the border of our ‘way back’ yard, with just enough space between them that I could scamper through for a short-cut to Teddy’s or Margie’s back yard; still within shouting distance if Mom needed me.

Many yards had lilacs – some white; some deep purple, but I liked ours best – the pale lavender ones with a fragrance so strong I’d get punch-drunk from the nectar scent and lie in the grass for hours … inhaling. 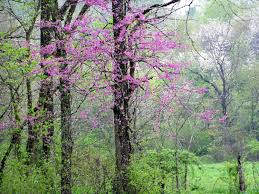 Red Buds – if you’ve never seen a red bud tree, you are missing one of God’s most beautiful gifts.

My maternal grandparents lived in a small town about twenty miles away, and the road between towns followed a river with undeveloped woods on both sides. That stretch was called ‘The Red Bud Trail’ because so many red buds grew naturally in the woods. They were quite small and fragile-looking, dwarfed by larger maples and oaks, but there was no mistaking that occasional flash of pink as we drove by.

People who don’t know might think – in landscaping – they are looking at a crabapple tree when, in fact, they are seeing a red bud in bloom. But for those who have taken red buds into their hearts, there’s no confusion. The red buds are much daintier blooms appearing well before any greenery and rationing themselves along the full length of their branches. From a distance, they have a distinctly fluorescent pink that no crabapple can imitate.

Red Buds Worth a 2nd Look

Red buds are also prized for their unique leaves – a light, bright green palm-size, heart shape that is all the more reason to love this tree.

I could name many more beloved spring blooms – magnolias, yes – but I’ll close with an anecdote about peonies because Luanne, poet and blogger at Writer Site, and I had a conversation about lilacs and peonies yesterday.

But Dad isn’t especially fond of them. When we moved to a property that included a farmhouse, barn, out-buildings and ten acres, Dad had a lot to manage when he got home from work. The previous owner had planted three rows of seven peonies – 21 peonies to mow around, weed, prop up during flowering season, and trim every fall. All which took time away from Dad’s vegetable and fruit gardening. One night, he bulldozed the lawn mower across those peonies, shredding them to the ground. He kept doing it until they finally died.

Comments on: "Five Favorites for Spring" (65)