In October 2005, Hub and I joined some friends on a 16-person tour in the Tuscany region of Italy. About 15 minutes after we left Florence on our way to Siena, our bus driver turned off Via Cassia and headed down a spacious driveway bordered by well-manicured lawn and stately trees.

Our guide, Marie Elena, announced she had a ‘little surprise stop’ for us.

As we departed the bus, we found we had entered the grounds of the Florence American Cemetery and Memorial, a 70-acre piece of land given to the United States by Italy as a permanent burial site for United States military personnel killed in nearby World War II battles during the first half of 1944 (who were originally buried in temporary sites).

This cemetery is one of 20 permanent American World War I and World War II military cemetery memorials established on foreign soil by the American Battle Monuments Commission. The use of these permanent cemetery sites – located in France, England, Belgium, Italy, Luxembourg, Republic of the Philippines, Holland and Tunisia – was granted in perpetuity by each of these host countries to the United States.

The Florence American Cemetery holds 4,402 gravesites of men and women who served in the United States military from the Philippine Islands, China, Turkey, Spain, Washington, DC and every state except Alaska. There are several headstones marking graves of Unknowns, and five pairs of brothers buried side by side.

I’m embarrassed to say I knew little about our military cemeteries overseas. Until that visit to the Florence American Cemetery, I gave little thought to the families of men and women whose bodies were never returned to the States for burial in family plots. And yet they rest for eternity on land dedicated forever to the memory of their sacrifice.

Leaving the cemetery was not the last time Marie Elena spoke of the American military personnel, in particular those serving in World War II. In numerous hillside villages, she pointed out churches, bridges, and important roads, telling us the Allies saved them from ruin or had a hand in rebuilding. She ushered us to one small village where her Uncle and his friends were sitting at the outdoor café having their morning coffee. She wanted us to meet her Uncle because he had fought ‘alongside the Allies’ is how she worded it. Uncle and his friends thanked us in rudimentary English for saving their village. 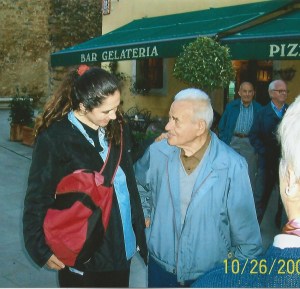 Marie Elena and her Uncle

For me, World War I is a chapter in the history book and World War II is living history that will become just as distant for younger generations as the last of its surviving veterans come to the end of their lives.

I am grateful to Marie Elena for teaching me something about my country’s history, and for expressing her gratitude for the sacrifices made by our military personnel.

As we make time this Memorial Day to honor and remember those who gave their lives, we honor those buried near and far as well as those whose remains have never been found or identified.

God Bless all our military familes, past present and future.

Maps and A Sense of Place

Buoyancy, Baggage and Beyond