Just a Notch Too Steep

August has come and gone, and Labor Day is upon us. While twilight eves of summer give way to autumn’s cooler dawn, I offer another example of doors in Colorado’s foothills – this time featuring gateways.

This particular gate awaits me at an intersection of paths where this dirt trail lopes south and my paved bike path curves northward to eventually circle Arvada Reservoir. This gate is my stopping point to catch my breath, sip my water and examine the plants. 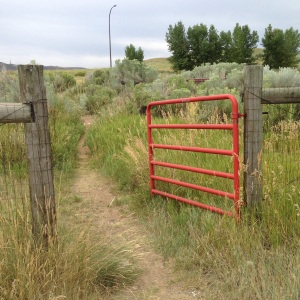 Open gate; is the trail open?

Although I enjoy riding the dirt trail parallel to a dry ditch, the path is sometimes closed two miles south. The following sign is permanent, but the gate might be open as shown above or closed and locked, as it appears below. I haven’t figured out the logic between open and closed gate, nor does the sign give an accurate status for the trail which has, in fact, been open to ride much further than two miles despite this permanent sign! 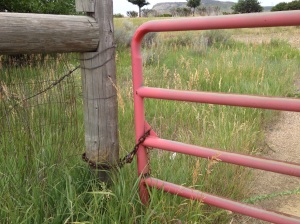 Closed gate ; is the trail open? 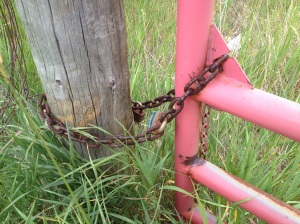 Sticking to my ride clockwise around the Reservoir, by the time I reach this gate, I’ve mastered the long, gradual climb westbound and have only an oddly enjoyable series of steeper switchbacks to reach the top and coast down the other side.

Riding up any series of switchbacks brings back many memories.

On our Vermont ride, there were no switchbacks. There were notches (basically grades straight uphill). As one local explained, “We call ‘em notches because they are always a notch steeper than you wish they were.”

I’ve ridden all my life,, but I never participated in high-altitude or long-distance rides until I met Hub. Our years sharing those adventures – especially with my brother, Jim, and our friends, Joe and Laura, remain some of my favorite memories.

Laura looking at her sox; Copper ride to Vail Pass

The first time Hub and I attempted to ride Vail Pass from the Frisco side (east to west), we encountered a series of steep, short switchbacks. If you’d asked me after that first ride how many switchbacks, I’d have panted “at least nine!”

Much to my surprise the next time I tackled that ride, some kind soul had reduced the number of switchbacks to three, and made them measurably easier. Isn’t that always the way with something unknown and challenging – the second time is much easier? And how do you come to that understanding except by being willing to challenge yourself the first time?

Riding Vail Pass from the Vail side (west to east) is considerably more challenging. Several miles of grinding gradual-but-tiring uphill on a road now closed to cars,

after which you gear up to dip steeply downhill passing under I-70 which looms far above. Immediately on the other side of the underpass, you make a sharp turn to the left while frantically gearing down to your lowest gear because the steep angle of climb is immediate and formidable. The one span of trail where switchbacks are desperately needed but the terrain doesn’t allow that luxury. (notice I don’t stop here for pictures)

If you make it up that impossible grade without having a heart attack, the rest of the climb is a comparatively manageable meandering climb.

Total climb is from altitude 8120 feet in Vail to 10,662 feet at the top of Vail pass. Generally it’s a wild and wooly scream back down from the top. But one time the wind was blowing in our faces in such fierce gusts that we had to pedal in low gear the whole way down. It was like riding up to the top twice in one day. Utter exhaustion.

The door to the condo was a welcome sight that afternoon!

This post is linked to Norm Frampton’s Thursday Doors. Thank you, Norm!

In Bloom: Flowers and Friendship

Is It Buck Naked or Butt Naked?