Is It Buck Naked or Butt Naked?

Heh, you couldn’t resist that title, could you?

That’s ok. I couldn’t resist this little gem of a book:

Malapropism: a word or phrase that has been mistaken for another, usually because of its sound rather than its meaning.

Some of you already knew what a malapropism is. I know one when I see it, but I didn’t know until now what it is called.

Most likely all of us have misspoken or written a malapropism because we were too young to differentiate between like-sounding words; we misheard song lyrics; or we were too busy ‘exercising our demons’ to pay attention.

According to my new dictionary, the blogging world has exponentially increased the (presumably unintended) use of both well-known and previously undocumented malapropisms. Rubin’s book consists of 216 pages of malapropisms, including Rubin’s short explanation of the misused phrase followed by a real world example he’s found in electronic media.

I decided to answer Sylvia’s 5 Photos 5 Days Challenge by playing with a few malapropisms. The rules for the Challenge are to (1) post a photo each day for 5 consecutive days (2) include a snippet of writing – fiction, nonfiction, poetry (3) nominate a blogger each day to carry on the challenge. I nominate all bloggers who wish to accept the challenge.

My first photo is one of many shrub shots taken while practicing with my new camera. 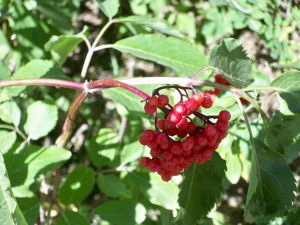 I looked in my dictionary to see what interesting B for Berry malapropism I could find. None.

How about ‘off the beat and path’?

From going to hell in a hen basket:

A ‘beat’, the sort that a cop patrols, is a regular routine, so ‘beat and path’ makes some sense and might actually improve on the clichéd phrase ‘off the beaten path’. Also confused with ‘offbeat’, a musical term.

“We are life long travelers and both prefer the off the beat and path locations where you can settle in and relax and that is what we tried to create for you.”

This will be a week of malapropisms – let me know your own favorites! I’ll have comments ‘on’ but please don’t feel obligated to comment every day!

Just a Notch Too Steep

Drone-ing In On the Homing Pigeon