This post is Day Three of the 5 Day 5 Photo Challenge in which I feature malapropisms. 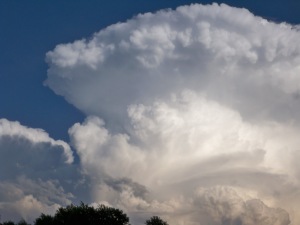 This massive, expanding thunderhead is representative of what passed overhead throughout the months of May, June and July when daily afternoon rains kept our foothills green far longer than normal.

The memory of such varied cloud formations led me to check the malapropisms listed under C in my going to hell in a hen basket dictionary by Robert Alden Rubin.

‘Cluster-fudge’ isn’t an official malapropism. I made it up.

It’s a polite version of the other ‘cluster-f-word’ and an apt description of the sticky messes our human race has stirred up in just about every country around the world.  Perhaps we’ll see ‘cluster-fudge’ in Rubin’s 2017 revised dictionary, should the world not ‘go to hell in a hen basket’ sometime in 2016.

In the meantime, ‘clusterphobia’ IS an official malapropism, and a condition I have been known to suffer.

The condition takes its name from the Latin – claustrum – a lock or bolt – and describes someone nervous about being locked in a small space. But a ‘cluster’ of people can indeed produce both ‘claustrophobia’ and ‘agoraphobia’ (fear of crowds).

“We’ve only been here a couple of hours, and the combination of clusterphobia and hypothermia is already setting in.”

Seek immediate relief when suffering preliminary symptoms of clusterphobia in order to prevent a cluster-fudge of epic proportions.

Drone-ing In On the Homing Pigeon