Archive for the ‘Six Degrees of …….’ Category

Just prior to reading Diane Keaton’s memoir ‘Then Again’, I penned a self-deprecating post about our connection with hats.

I don’t recommend reading ‘Then Again’. While the content – especially her very close attachment to her strong-willed mother – was informative, Diane’s book was poorly written. Chapters did not flow in logical order and paragraphs rambled, making it difficult to follow her chronological life or grasp the fullness of her relationships with family and significant others.

Diane, in interviews, appears charmingly scattered while enthusiastically embracing many passions. In movies, she plays roles that maximize her eccentricity and her underpinning grit. In writing, she could have used a counterbalance to her free-wheeling.

Thus with some reluctance, I opened her recently published ‘Let’s Just Say It Wasn’t Pretty’. Fortunately this book is essays which, by definition, have more concise structure than a memoir.

Diane’s topic – beauty – and her broad application of that word held my interest, provoking musings on how the concept of beauty affects our sense of self.

I’m still learning how my ‘writing production’ works best. Right now, that’s filling copious notebooks with whatever is on my mind, and eventually a post writes itself. I have a few mind conversations ‘spinning’ from Diane’s book. Sooner or later they’ll coalesce for me right before they appear for you! 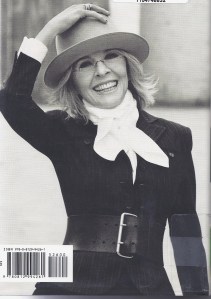 Who hasn’t repeated that iconic line from Billy Crystal’s character “Fernanado” during his stint on Saturday Night Live 1984-85?

Billy Crystal turned 65 on March 14, 2013. He has been an entertainer and comedian since the day he was born. Now he entertains us once again with his recently published memoir, Still Foolin’ ‘Em. I highly recommend this book to anyone who’s enjoyed Billy at any stage in his career.

Billy’s early audience consisted of his close-knit Long Island Jewish family, headed by his father who was a jazz concert promoter and managed the Commodore Music Shop in New York City. Extended family gatherings were the perfect venue for young Billy to figure out he enjoyed the limelight and was a “natural” at entertaining a crowd.

“Growing up Crystal”, as Billy describes it, meant immersion in jazz music at his Dad’s record store; hours listening to comedy records his Dad brought home; and summertime explorations of the surrounding beaches, boardwalks and waterways with his childhood buddies.

As expected, the book chronicles Billy’s rise to stardom: his grueling late nights in comedy and nightclubs, his Saturday Night Live stint, his successful movie career, and his reign as host of the Academy Awards.

However the true essence of Billy’s memoir comes down to:

While he writes of the woes and ironies of aging with the bawdy humor you’d expect, it is his passion for his family, his late father and the New York Yankees that makes this memoir so compelling. I will leave it to you, dear reader, to learn more about Billy’s lifelong love affair with the Yankees, his early musical adventures in the company of New York’s jazz greats, his long and happy marriage to Janice, his relationship with his beloved daughters and grandchildren, and his enduring friendship with Muhammed Ali.

When Billy was only 15, he lost his father unexpectedly, a loss that deeply affected Billy. Because his father worked six days a week, Sunday was the only day Billy was able to spend with him. Billy calculated they had exactly 700 Sundays together. In 2013, in a loving tribute to his father, Billy wrote and acted in his one-man, Tony-winning, Broadway production called “700 Sundays”. It aired recently on HBO; if you have a chance to see it, do!

I fell in love with you in the late 60’s when your Stone Poneys’ folk-rock song “Different Drum” hit the charts. Oh, how I wanted to be like you in that song: emotionally strong, independent, not needing a guy, forging my own path unencumbered by someone else’s expectations.

I followed you through the 70’s as your wide-ranging, crystal clear voice and rock music repertoire earned you status as one of the few solo “girl singers” on the male-dominated concert circuit.

Sure I enjoyed your music, but more urgently I wanted to BE YOU:

I wanted to be the “you” captured in photos wearing that simple white peasant blouse and those up-to-here cutoff jeans, your shapely legs curving down into a pair of well-worn cowgirl boots. I wanted to be the “you” who shared the stage with Emmy Lou Harris, belted out duets with Neil Young, and partied with Don Henley and Jackson Browne.

You were everything I wasn’t – me stuck in white bread Midwest America where a glamorous singing career, star-studded parties and a seemingly wanderlust path were about as attainable as a trip to the moon.

All this time I thought I knew you, and I envied you. You set me straight in Simple Dreams about life on the road and my false impressions about the ease of your rock star career. Your “party” image and bad girl attitude were promoted by your manager to shape your public persona into one fitting the rock milieu. For the most part, that image didn’t reflect you or your rich Mexican heritage and close family ties.

Your life on the road was often lonely because breaking into the rock industry as a female lead singer came with its own stressors, many the result of male band ego issues.

During your long and productive career, your musical aspirations grew well beyond your folk-rock beginnings. Not only did you return to your roots with an album of Mexican folk songs, but you had the courage, ambition and talent to star in the operatic Pirates of Penzance on Broadway:

followed by another musical shift when you recorded the critically acclaimed jazz/pop albums with Nelson Riddle and his orchestra:

From short-short cutoffs to pirate pinafores to elegant ball gowns, your crystal clear voice has filled my home with music straight from your heart.

Linda Ronstadt was inducted into the Rock and Roll Hall of Fame on April 10, 2014. Sadly, she has been diagnosed with Parkinson’s disease silencing one of the most gifted singing voices of our time.

My daughter-in-law gave me a hat for Christmas. At first I wasn’t sure I liked it. It reminded me of the hat 94-year-old Winnie wears at the Denver Bridge Club. Every Friday wearing that hat, Winnie acts all old and forgetful, then she wickedly beats the pants off her opponents. Including me. Every time.

But you know the rule with family gifts: fake smile; fake thanks; wear it at least once; re-gift it (but not to someone in the family).

The following Monday was cold and snowy so I decided to try the hat while Hub and I ran some errands. When I climbed into the car, Hub looked at me and exclaimed, “Hey! You look like Diane Keaton in that hat! I’m running errands with Diane Keaton!”

I rolled my eyes and he drove out of the garage. A mile down the road, I looked over at him; HE WAS LAUGHING!

You know that laugh … the one where you have to laugh INSIDE because you don’t want the other person to know. The laugh you can hardly keep in, but you have to, so you tightly purse your lips, then your body starts shaking from the effort to keep the laugh to yourself. And eventually a snort gives you away.

Yeah, that’s how he was laughing.

“Oh, you’re just so damn cute in your Diane Keaton hat. I can’t help it.” he replied, then added under his breath, “Diane”.

We stopped at the library to pick up some items I’d placed on hold. I reserve so many books & movies that I make a weekly library jaunt, never knowing exactly which items will be waiting for me; always pleasantly surprised at what has arrived.

Surprise is an understatement !

Today, on the hold shelf, were not one BUT TWO tangible signs that I was, indeed, channeling Diane Keaton:

Then Again – an autobiography by Diane Keaton

And the icing on the cake?

When I texted my daughter-in-law to tell her my heartfelt-thank-you-I-LOVE-THE-HAT-and-here’s-why story, she texted me back, “I love Diane Keaton. But not as much as I love you.” 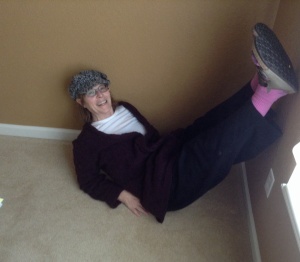 Were you embarrassed when it happened to you?

Launch my blog … heart all a-flutter with a myriad of literary possibilities.

So far, so good. I even receive a couple of “XX is following you” ego boosts.

I sign on a couple hundred times to admire my own posts.

Play around a little bit, haphazardly press a few buttons.

Then The Email arrives… from WordPress CentCom:

You’re so vain. You “like”d yourself.